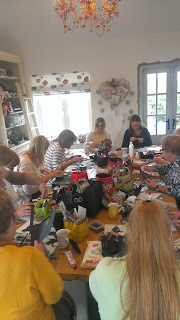 Hello, or should I say Bonjourno?!
I am back from Italy, it was unbelievably fabulous and I have tonnes of photos – but that is for another post.
So, last Sunday I set out in the wind and rain at 6.15am  (that sounds like a hardship but I was delighted to be going!) to Bunmahon in Co. Waterford. Caroline from Crafters Cove had invited me to her home studio for the day… oh my, what a studio!! she had arranged for 10 crafters to come to the class and for Bernie from BK designs to bring her shop along.
I have to say a huge thank you to Caroline, not only did she do all the organising she also had croissants warming in the oven for when we arrived!!!

Here are the Ladies hard at work, there were times when it was silent because they were concentrating… I was beginning to get worried.

But then they got chatty again, right about the time we declared a tea break!

This is Pat hiding behind her house. We used Echo Park “Chillingsworth Manor” paper and the new Graphic 45 Steampunk Spells stamp set, which are gorgeous by the way.

Now you can see the whole village of haunted houses, all different, some had purple windows, others green and one had turquoise!

This is my house… i’m still adding bits to it.

This was the kit for the day – I decided to put the house by itself and a smaller kit (just enough to decorate the house without making the back part) on Ebay, i’ve never sold anything that way before so it’ll be interesting to see what happens! I’m doing it all again on the 28th in Ballinameela and then 10th October here at home for anyone in Kerry. But you could always put in a bid on Ebay if you want!

I just wanted to show you this album . It was sent to me by Martina in the swap organised by Sandi and I just love it! It is so pretty, this photo doesn’t show the colours well. We included tags with “things you didn’t know about me” on and its a great way to get to know your swap partner.

She put in a Halloween page because she is a fan too – how fab is it?! Thank you again Martina!!
So, thats all my news – I will be back with a post about Kates CHA release weekend soon, i’m deciding what classes I want to take, spoilt for choice I am!!
17/09/2013 By felicia
Share Tweet Pin it +1 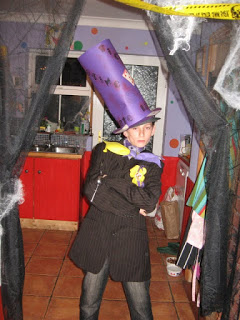 "We have all done things we regret, but it doesn't make us bad. Every day is a chance to do your best and if you do that, then all is well."

You can read more about Mrs Adams in 'Miss Polly and the Crocodile ' - link in bio xx ...

"You can find magic wherever you look, all you need is a book" -
Dr. Suess 📚

Evan is only 2 but he likes Mrs Adsms and the Crocodile best!
🎄 I have sent my last orders, my last day st work is tomorrow. I have battled the supermarket, just a few things left to do.
🎄It's Yule, blessings to all, I hope you can enjoy this Christmas, and if it is a hard time of year for you then I send you all the love. ❤
🎄🎄🎄🎄🎄🎄

Say hello to Lola!
Lola is very wise, her sentiment says,
🌸" Whether you think you can or you can't you are right".🌸

She reminds us to think positively, to believe in ourselves and that if things don't go to plan it's ok.

Be kind to yourselves this weekend lovelies. Xx