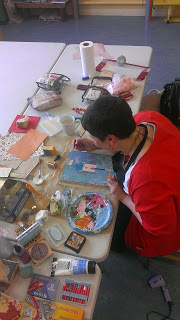 So, I dragged my behind out of bed at 5.30 on Saturday morning, packed the car (with just about everything from my craftroom) and had the luxury of Himself driving me to Co. Waterford. He decided to do a bit of exploring around Youghal and Dungarvan so it worked out very well.
There was such a nice bunch of people there, Create with Kate had an enormous shop, Karen Matthews and Betty Cominsky were there ready to alter the cutest little birdhouses, there was knitting, quilting, basket weaving,cake decorating (which was so amazing it was hard to believe it was icing!) Carol Grogan from Crafty Cutting was there, we had very cool Dylusion demos……. (I think my resolve is slipping and it could be a new addiction!! ) and there were lovely ladies who had made hundreds of cakes and kept the refreshments coming all day!!
I had two classes, the first was a mixed media painting. We painted onto wood rather than canvas because its what I prefer – it so much tougher and takes more abuse!! Here is Michelle Bermingham doing her thing, she ended up with a beautiful painting of a birdhouse. It was such a very relaxed class with no rush and we got loads done.

We had a great big classroom and we spread out all over the place! this venue was so perfect,thank you  Ballinameela National School for letting us loose in there!!

Later in the day while I was doing the mini album class two more people turned up but they wanted to paint. Since the day was so relaxed and we had so much room it really wasn’t a problem, Donal used the same techniques as the others but chose darker colours. That turned into an outer space type scene with die cut metal planets…..

(for some reason I cant rotate this photo, so turn your head to the left) He decided it wasn’t complete without the Tardis – how cool is that?!

Mary used purples, greens and pinks for her background which was finished off with enameled butterflies. I always forget to take proper photos… I really wish I had taken more because they all did such lovely work!

By the end of the classes Himself was back from his travels, we got some great books at the book sale, were sent home with loads of cakes (Midi’s chocolate biscuit cake won’t last long!!) and the new Tim Holtz alarm clock to play with. I was quite sorry that I wouldn’t be there for the next day.

This event was organised by Midi Walsh, she is a great woman to get things done! It wasn’t as well attended as it could have been, probably because it was a bank holiday with fine weather – but next year will be bigger, these things start small and I really hope this becomes an annual event. I am definately going to be there next March…… Midi is already planning it!!!!

who wants to play??? 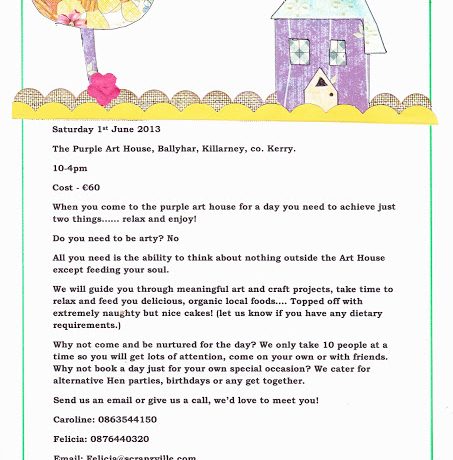